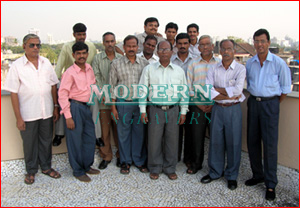 Modern has been enjoying a solid reputation for high-quality and reliable production services since its formation in 1951(known as M/S Modern Engravers). Since its formation Modern has been a one man-show going generations together from Mr. Vithal Pandurang Vagal and followed by Mr. Ranjan Vithal Vagal. Modern's success is also totally based on its employess who has been a family to Modern. Mr. Gautam Ranjan Vagal and Mr. Saurabh Ranjan Vagal (the third generation from the family), has also joined the family Business with great interest & Enthusiasm.

Its success is based on its continuous efforts and investment in its employees and technology, plus a total commitment to quality. The company has grown over the last few decades with investment in advanced machinery and sophisticated CAD/CAM software which has been key to its growth.